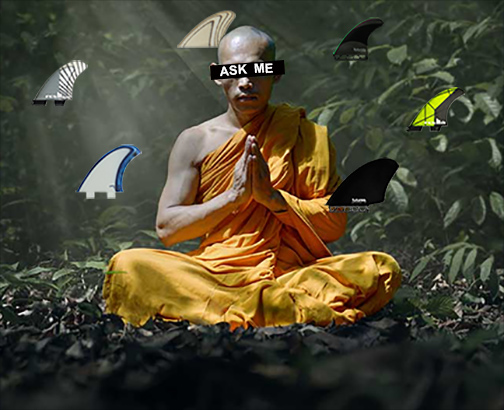 Having shaped over 2,500 boards and worked on the floor day after day at our shop USEDSURF, one thing becomes clear - next to the surfboard, your fin choice is probably the second most important thing that will determine the performance of your surfboard!

Keeping our ear to the floor, staff reporting back after trying different fins, and our GIANT fin demo program with over 200 sets of different fins to try between the two systems has enabled us to become pretty damn good at making fin recommendations to customers based on what they tell us might be missing from the performance of their surfboard. We also recommend fins on what customers are wanting more of, depending on the wave they surf regularly or are going to surf.

Above all, we know what fin templates tend to favor certain board models - for example, the Timmy Patterson Rising Sun Model. All day long, people bring boards in to sell at USEDSURF. We tend to make small talk, "Hey, so how did you like this board?" When people mention they don't necessarily like it or "couldn't get it to go" the first question I ask is, "Do you mind telling me what fin you were riding?" Having a lot of friends that have had the Rising Sun by Timmy Patterson, I know that they’ve tried a lot of different fins, and the T1 from Futures or the Mark Richards FCS Template (basically a twin plus stabilizer) has been the ultimate for that board. When customers tell me they rode a regular F6 Futures or Performer Medium from FCS, I tell them what I know. Occasionally, people have taken their boards back just to try the recommended fin as a last resort before selling it. And yes, on a few occasions, customers have returned to tell me their mind was blown, how different the board rode and that it's now one of their favorite boards. 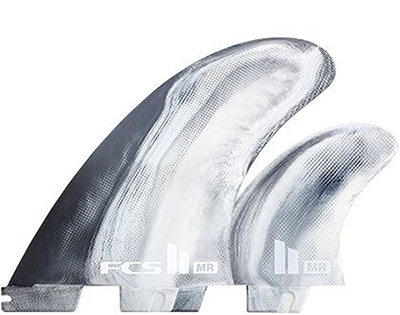 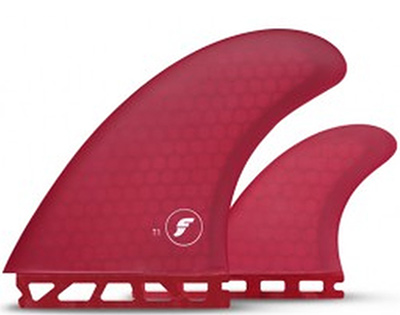 The Hayden Shapes Hypto Krypto is another board. It has a flatter rocker and some V in the tail. So when people try a fin with a lot of rake, they don’t like the results. A great example of this is from a customer. He had a Hypto Krypto from a friend who was a Hayden Shapes rep, and when riding it this customer went back to his friend and told him he wasn’t impressed and that he didn’t know what all the hype was about, that the board was just okay. The rep asked what fin he was riding and then proceeded to tell him that he needed to try the Hayden fin template. After trying the fin, the customer said it completely transformed and he could see why it was liked by so many surfers. I use this example for when someone says their Hypto is going just okay. Because of this, I’ve seen two occasions where customers have said, "man, night and day!" after switching the fin template. 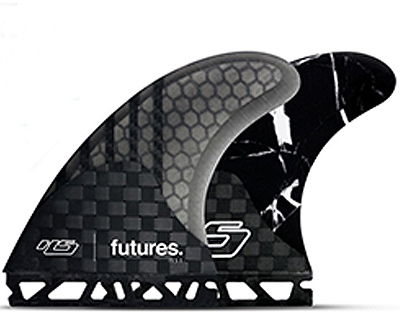 In the Hayden Hypto Krypto case, if we look at Hayden's fin design we see he has somewhat of a long-running base and his template is very upright. This allows for some drive from the base, but being that the fin is very upright, this allows for a lot of pivot. This is the perfect complement to the lower tail rocker of the Hypto, whereas a raked back drivey template will leverage it too much and there is not enough curve in the rocker itself, so it will not turn or pivot as easily.

So this leads us to some of the main key points of fin templates that can help us decipher which fin is best for your particular board. In general, when it comes to everyday surf what every shaper or fin designer is trying to do with their fins is essentially what shapers are trying to do with their boards. And that's typically to get the fastest, loosest board possible - I mean, of course, the drivey-est loosest board would be the ultimate board. So it is the same for the ultimate fin, where good drive, plus a quick response would be the ultimate fin. Again, this is generally speaking, as there are ultimately certain scenarios where you might want a longer carving fin for a point break, a really pivoty fin for a small tight beach break, or perhaps you are a 230-pound man who requires a lot of surface area to leverage against your weight. 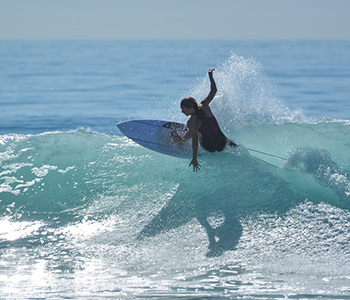 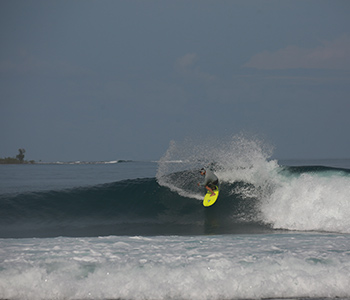 First off, I look at the running base of the fin template. The length of the base has a lot to do with the drive. Water has to run the length of the base of the fin before it can pivot around it, so typically the longer the base the more drive you get. Conversely, a shorter running base has less drive but more pivot. BUT, this is not an absolute, as there are ways to counter these attributes to achieve the right balance for the shaper’s/fin designer’s desired results. These nuances will be discussed in future parts of this fin article series. In general, though, lower rocker boards tend to favor a pivot fin or a little bit of a shorter running base, and a high rocker board tends to favor a drivey fin or longer running base. There is a really cool page on the FCS Website that gives a bunch of info on base, depth, sweep and area HERE 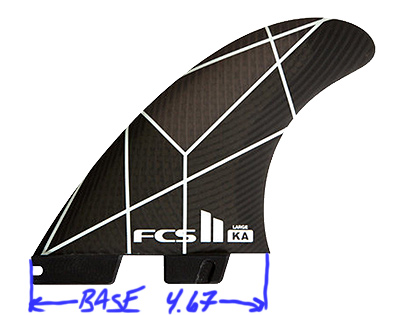 The second part of the equation I look at in a fin template is the rake or the amount of the sweepback of the template. If a fin is swept back (also known as 'rake') then it's going to have some drive and carve a longer arc. With less rake, the fin will be straight up and down, which means the board will carve tighter, shorter arcs and have a little less drive. Again, this is generally speaking, as there are things that can counter these basic rules. 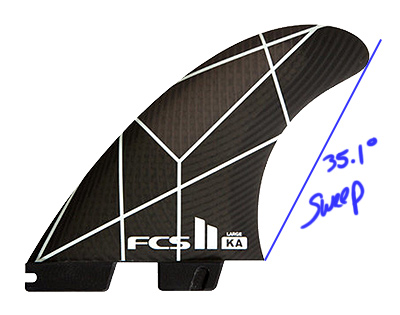 The next variable I look at is the shape of the template. So, once the running base and the rake is determined, it comes down to the shape of the fin. If some of the width of the fin template runs higher up the template from the base, then that can create more drive. Or, if the back of the fin is cut out, that will loosen the fin. As the template transitions toward the tip of the fin, the next variable is encountered and that’s the shape of the tip. The fatter the tip the more hold you will have through the turn and the less release. The narrower the tip, the quicker the role of the transition from rail to rail, as well as a reduction in hold through the turn. So this means you may get the fin to release easier than a fat tip. 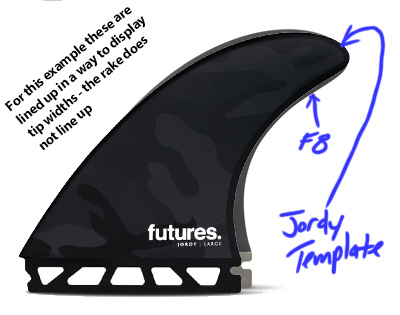 There is also the implementation of the smaller trailing fin (center fin) that some shapers and athlete templates use. This method is used to achieve the perfect balance of drive and looseness. This is where instead of all the fins having the same template and size, the center trailing fin is a little smaller or even a different shape. This allows for additional pivot by reducing the surface area of the back fin, all the while having a good amount of drive from the front template. Kelly slater FCS K2.1 (now the FCS V2 and the FCS II REACTOR) and the Futures WCT (which is now the PIVOT) are good examples of this theory, as well as the Captain Fin Dane Reynolds template and Al Merrick's medium and large template. All these templates have either a smaller or smaller differently shaped center trailing fin. 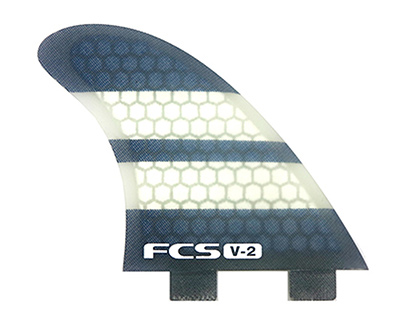 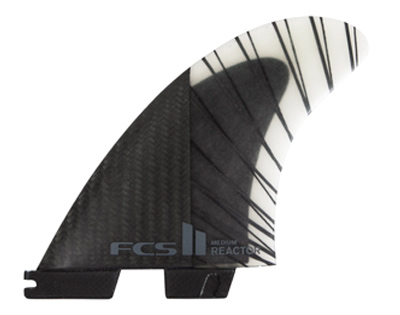 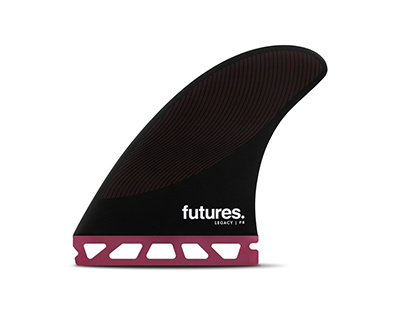 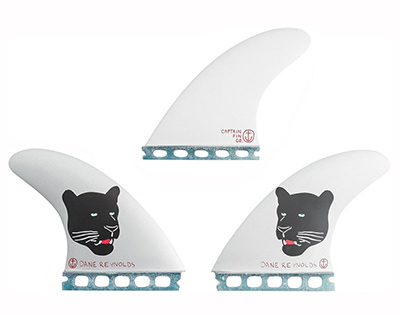 All these things, along with flex and foil, will create an effect that will either complement the board or work against it. If it is a flatter, fishier grovel board, it will typically favor a fin with more pivot. This is because the curve won't be in the rocker as much as a high rocker board, so you will need some pivot from the fin. If it is a good wave board, an everyday shortboard. a step up, or high rocker board it will favor a template that has more drive and rake. This is because, on its own, boards that have a lot of rocker need to leverage all that curve, so a longer running base and more rake will counter that curve and create the drive needed for that type of rocker. There are always exceptions to this, so this is just a general rule. As an example, Mayhem puts a lot of tail curve in some of his "grovel" boards. They are shorter and wider but curvy in the tail rocker. So a drivey fin template counters that curve and just might be the best template. This part might be a bit hard to figure out, so maybe consult the model description from the shaper for any insight. In general, though, I just think about the type of board it is and keep it in the background while accessing the right fin template. 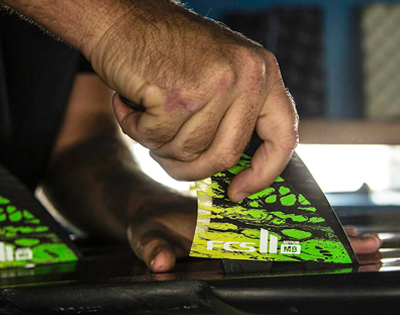 This article is the first installment of a series that will cover all the different template variables to try to help you determine if there's anything missing in terms of having a more optimum fin for your board. We will cover in-depth the previously mentioned components as to what makes up the right fin template using more details, fin comparisons, and examples. As with most things in surfboards, there's a lot of nuances, so we will try to help you navigate through these and result in a successful combination of fin to board that will help you get the most out of your surfboard experience.